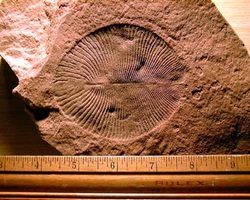 The first fundamental change happened with the appearance of eukaryotes. Eukaryotes were the first cell with organelles, which are the organs of cells. Many scientists think eukaryotes evolved from prokaryotes, which are cells without organelles. Some prokaryotes evolved into eukaryotes due to the change in the earths atmosphere. Many prokaryotes depended on chemosynthesis (the process of deriving energy from chemicals) instead of sunlight for their energy. With more oxygen, cells had to evolve in order to survive. Many species of the time went extinct due to the dramatic increase of oxygen over the Proterozoic eon, but eukaryotes flourished.

The first unicellular eukaryotes were acritarchs, which came about around 2.1 BYA. They were the most common fossil found among the late Proterozoic era. Some are thought to be the ancestors of modern day planktonic algae.

The first possible multicellular eukaryote was the Grypania Spiralis, which looked like coiled ribbon. It was two millimeters wide and over ten centimeters long. It is controversial whether or not the Grypania was eukaryotic, so the first eukaryote could have been the Horodyskia, which is dated at about 1.5 BYA.